The MIXER is a central hub to where all sound sources go. Here the Oscillators get mixed before being sent to the Filter. It's in the mixer that you choose the balance between all the available sound sources. In DRC you are able to saturate the input of the FILTER and this has an effect not only in the overall tone but also in the perceived balance between different sources. After reaching a nice balance between sources you can take advantage of the PRE GAIN fader (pre-filter) to control how much signal goes to the FILTER input.

Its also in the MIXER panel that you find all the available DRC Effects. Effects are essential to add even another layer of sonical awesomeness to the DRC sound. We thought that it would be a waste of time and effort if we simply added some bread and butter DSP effects to the synth engine, it would serve no purpose to degrade what is already a really great sound. So, having access to a lot of amazing analog synths and effect boxes, we decided to study them, in order to bring out what's best in each one of them, always adding some interesting twists to the plot. 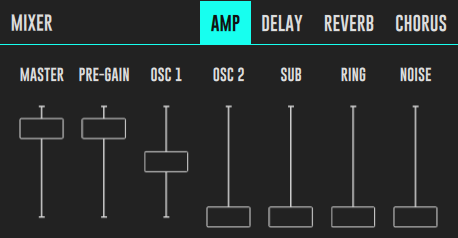 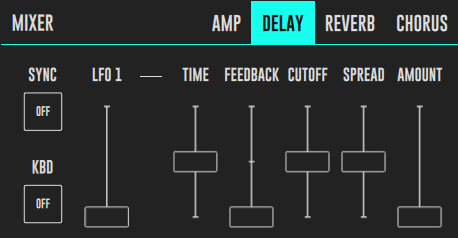 The Delay effect of DRC is unique. The delay topology is inspired in classic BBD analog delay and Tape Delay topologies, but with a bunch of little tweaks that make it a very simple yet extremely powerful tool. The DRC DELAY uses modeled wow, flutter and noise typical of tape delay machines to give it a very pleasing characteristic with feedback pushed to the limits. The feedback repetitions are filtered and the cutoff frequency can be tailored from bright to very dark altering completely the behaviour of the DELAY. There are actually two separate delay lines working together and there is the possibility to SPREAD the time between left and right delay lines. There is a very unique trick employed here that makes the DELAY stereo image interact with the CUTOFF slider. On top of that this DELAY can be synced to the tempo and tuned to the notes being played, the later makes possible the use of the delay line as a Metalizer effect.

Note SHIMMER DELAY: If you decrease linearly a DELAY TIME you get an increasingly higher pitched output from it. You can use a Sawtooth waveform to achieve this, albeit there is an audible transition at the repetition of the waveform, but it is most of the time actually increasing the pitch steadily. This effect, even with some artefacts is the base of the Shimmer Effect. There is a way to get rid of this unpleasing transition artefact, but it is not applicable to the DRC DELAY. To achieve this effect try modulating a long FEEDBACK DELAY with a somewhat fast SAW waveform from LFO 1. This will Shimmer form shure. 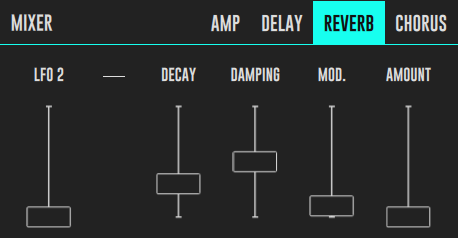 Reverb is what defines the characteristic sound of a particular space, it's made of the build up of all the different reflections on surrounding surfaces. Your synth can sound great without it, dry as a bone, but one out of ten times, a little bit of reverb contributes to make a good patch sound even better/bigger, specially when not buried deep in a cluttered arrangement.

The REVERB in DRC is not trying to emulate any particular physical space, not even a Plate (a kind of electromechanical old school reverb, although it can resemble one in some aspects). It is very lush and great for giant outer space sci-fi landscapes, which might sound artificial, but what are syths for if not to create great unrealistic sounds that seem came from another planet? We made it so outrageously big that it can actually grow beyond decay. It has internal modulation contributing for added life and complexity to the sound, or to even more abused chorus like effects as you approach the limits of the controls. We also made possible for the AMOUNT to be modulated with LFO 2 after experimenting with a DIY analog modular setup that sounded great. 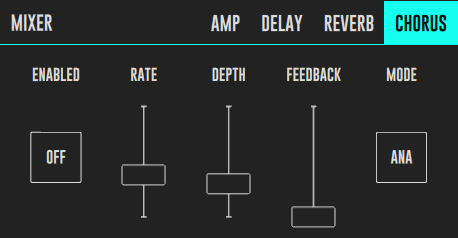 Chorus in the analog synth context is an effect which thickens the sound and also widens the stereo image. It accomplishes this by mixing the unprocessed signal with a small delay that is modulated. Many great synths and string machines have used it to capture the lushness and power of a whole ensemble. In DRC we implemented two types of chorus, both true stereo inspired in the best analog examples we were able to put our hands on.

Next we explain the Modifiers section.