In this panel you get to control all the available modulation sources (EG 1, EG 2, LFO 1, LFO 2) and also the Arpegiator. This various modulations are then fed through the synth and give life and movement to the sounds. They are fed to the Oscillators, Filter and even to the Delay and Reverb Effects.

EG’s (Envelope Generators) are essential to make notes sound and behave like an instrumento is supposed to sound, giving the notes a defined beginning, duration and eventually an end.

The Arpeggiator is a module which takes the notes you play and converts them to a rhythmic progression of notes, which are played automatically in sync with the master tempo of the DRC or of your project (if used in the context of DAW - Digital Audio Workstation). 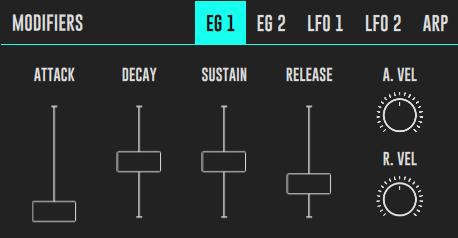 EG stands for Envelope Generator. EG’s generate a control signal that resembles the envelope of real instruments (or not), generated when you hit it, or pluck a string, or whatever. You can control 4 major parameters, ATTACK, DECAY, SUSTAIN and RELEASE and with these construct any kind of sound behaviour.

We used a novel method which even gave the name to the whole synth (DRC - Digital Resistor Capacitor) to make our envelopes. This gives them a completely foolproof analog behaviour, because they are truly analogous of a real ADSR that charges a capacitor through a resistor.

In DRC you have two EG’s, one used by default in the VCA and the other hardcoded to the Filter Envelope. 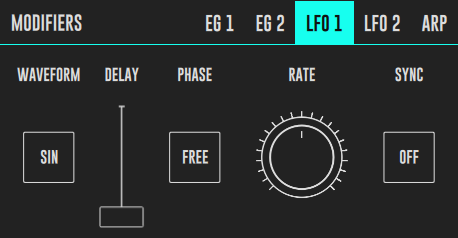 LFO stands for Low frequency Generator. As the name implies this is a special type of Oscillator which creates a slow moving waveform, below audible. This waveforms are used to control all sorts of parameters throughout the synth. This gives life to sounds, making them evolve in time. We use 2 LFO’s in DRC and both have many different waveforms for you to choose from. LFO’s can be delayed and Synced to master tempo. 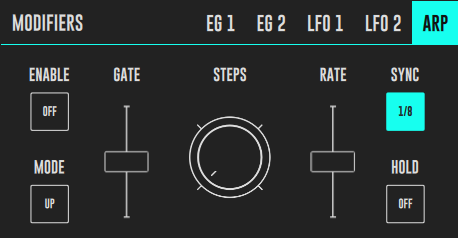 We now move to explain the performance modes.